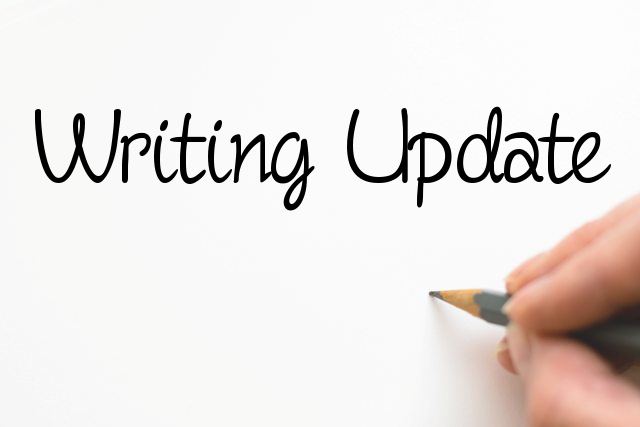 Last week, I reached two goals: raising enough funds to commission a logo for Word Nerd Scribbles, and revising/submitting the third of this year’s short-stories.

I mentioned in a previous post about how my Ko-Fi goal was to raise $30 in contributions to commission a logo design. The accompanying image, with its whopping 193% completion statistic, may make it seem like I had a torrent of donations come flooding in after putting out the call, but such was not the case.

Here’s what happened. In truth, I was recently seized by a fit of reorganizing my home, a particular madness often manifested as a side-effect of writing difficulties, which resulted in my cleaning out my bookshelves (and rearranging them. They look really cute now). At a library sale some years ago, I picked up a textbook workbook for A Biography of the English Language (nerd) for the price of a handful of change and simply never cracked it open. It went into my to-go pile.

With the box full of books I cleared from my shelves, I could have started up an online bookstore, but I wanted the books gone with no unnecessary clutter in my (small) apartment. Through a Money Pantry article, I discovered Book Scouter, which searches something like twenty vendors for any interested in buying your book, listing from highest to lowest bid. Turned out ValorBooks wanted this workbook for $40! I also sold a bunch to Powell’s Books and I put the proceeds combined toward the logo goal.

So we’re getting a logo! I’ve decided on which artist at Fiverr.com I want to hire, so now I just have to work out a logo concept.

For the fall equinox, I had a spooky day out with my closest friends for Halloween shopping, but I also submitted the last of my three short-stories to Cosmic Roots and Eldritch Shores for their final quarter reading period. Nothing compares to the high of finally completing a piece, but marking this goal off my 2018 to-do list comes pretty close.

This one I wrote toward the beginning of the year while feeling emotionally down and I hated it very much, thank you. (Regular writing sometimes involves plucking out something that absolutely sucks, but doing the work anyway. Oftentimes it washes out in the revision process, with a lot of elbow grease and anguish.) It then went through two more drafts and rotted within the folders of my computer for most of the year before I sat down the other night and reworked it one more time into something I actually like.

It’s a weird story, which isn’t a surprise, considering the fiction I post on the blog, and it seemed like Cosmic Roots and Eldritch Shores might be its only possible match. Here’s aiming for another letter, rejection or acceptance.